Supreme Spr/Sum ’19: overview of the partnerships

The official preview is out from the 18 of February, let’s check which brands collaborated with Supreme for the warm season.

This skater and design collaborates with Supreme every season, Mark is one of the most influential skaters of the story and father of modern skateboarding. Here a storic video of him by Trasher magazine.

When motorcycle rider Johnny Blaze sells his soul to the Devil to save his father’s life, he is transformed into the Ghost Rider, the Devil’s own bounty hunter, and is sent to hunt down sinners. The collaboration include a Vanson leather jacket and a long sleeve t-shirt.

This artist who works and lives in New York. He works typically  in series, and freely from the vocabulary of modern painting, his canvases are expressionistic, gestural and colourful.  His artworks are the product of an intense psychological process, with some pieces taking years to complete.

A collaboration with a football team, check  here  the story of the team.

The Catalan surrealist painters is celebrated with a series of shirts with the famous painting “The Persistence of Memory”  designed by Dalì in 1931. One of the most recognizable work of the painter now exposed at MoMa Gallery in New York.

was a Hungarian-American actor famous for portraying Count Dracula in the 1931 film and for his roles in other horror films. This design is very eye-catching.

Another sport collaboration, this time with an Italian company, specialized in cycling technical clothing. For worldwide cycling images, check their Instagram page, here.

Ol’ Dirty Bastard, was an American rapper and producer. He was one of the founding members of the Wu-Tang Clan. After many arrests, the rapper was placed into rehab and later prison. He died on November 13, 2004, from an overdose of drugs at 35. His style is famous for being outrageously profane, in a distinctive half-rapped, half-sung style.

For the tees and the rug, Supreme takes inspiration from the cover of the album Return to the 36 Chamber. Here a song with Method Man that sounds greatly.

A drug kingpin is released from prison and seeks to take total control of the criminal underworld in order to give back to the community. A classic New York’s gangster movie. Up, a crazy moment in the movie. 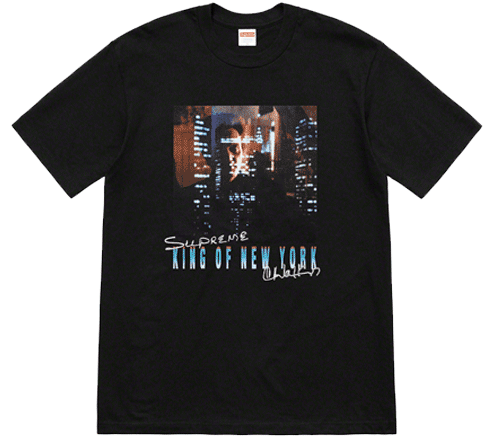 One of the most hyped pieces of the collection the drum set: Pearl Session Studio Select Drum Set & Zildjian Cymbals.

Is the oldest porcelain manufactory in Europe, founded in 1710 by King Augustus the Strong. The company is synonymous around the world of the highest-quality porcelain and exceptional craftsmanship.

This is an American company leader in crafted pool cue.

Among the best hammock available on market.

The historic Italian Moka. In Italy over the 90% of the family own it one.

The Super Soaker 50 is  was one of the first pressurized water guns ever made, it became super popular during the 90s.

The collaboration that takes you back in time of your childhood.

Another useful instrument for the house, a tape measure.

Cressi is one of the largest manufacturers of water sports equipment in the world founded by two italian brothers, Egidio and Nanni Cressi in 1946 in Genoa, Italy.

Frette is a historic textile brand, born in France in 1860 and moved in Italy the following year. It’s a luxury hotel provider.

Flashlight working up to 200 hours.

When the value of your lock is higher than the stuff inside your locker!

Chris Stamp for Ikea, a mix between home decor and streetstyle

3 Comments on "Supreme Spr/Sum ’19: overview of the partnerships"

Your email address will not be published. Required fields are marked *